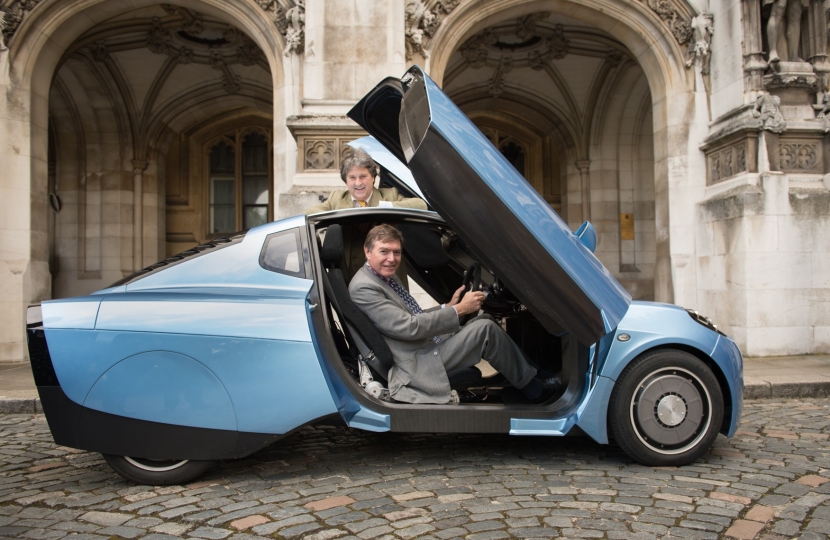 The car and its designers showcased the future of British design and engineering, explaining their longer-term plans to kick-start a new manufacturing business and community-centric hydrogen infrastructure.

Philip Dunne said:  “It was encouraging to see the progress that Riversimple has made since establishing an office overlooking the River Teme in Ludlow several years ago.

It is a highly innovative business, pioneering radically new automotive technology. Despite establishing workshops across the border in Powys, the talented team behind the creation of this hydrogen car still has a toehold in Ludlow.

Part crowd-funded, the business has potential to create many manufacturing jobs over the longer term, which I hope could come to Shropshire.”

After the meeting, Riversimple founder Hugo Spowers said: “It was incredibly exciting to take our car to Westminster and to see the positive reactions of MPs, who were overwhelmingly supportive of both our ethos and our radical business approach.

Philip Dunne has been a longstanding supporter of the company and it was particularly good to show him our latest car, the first designed for full type approval.

The UK government has recognised the potential of hydrogen fuel cell vehicles, and has already implemented forward-thinking projects that are promoting this cleaner alternative.”

Riversimple has agreed the first trial of its hydrogen-powered cars in the UK.  It is partnering with Monmouthshire County Council, to run a 12-month trial of the Rasa, which has a range of 300 miles, refills in a few minutes and has no cost premium compared with a conventional car.

In 2017, Riversimple will supply 20 hand-built hydrogen cell cars, to be driven by residents in the county. It marks the first phase of the company’s plans to develop a community of users around a single hydrogen refuelling station. As part of this initiative, a self-service, mobile refuelling point is planned for a council car park at Abergavenny or Monmouth.