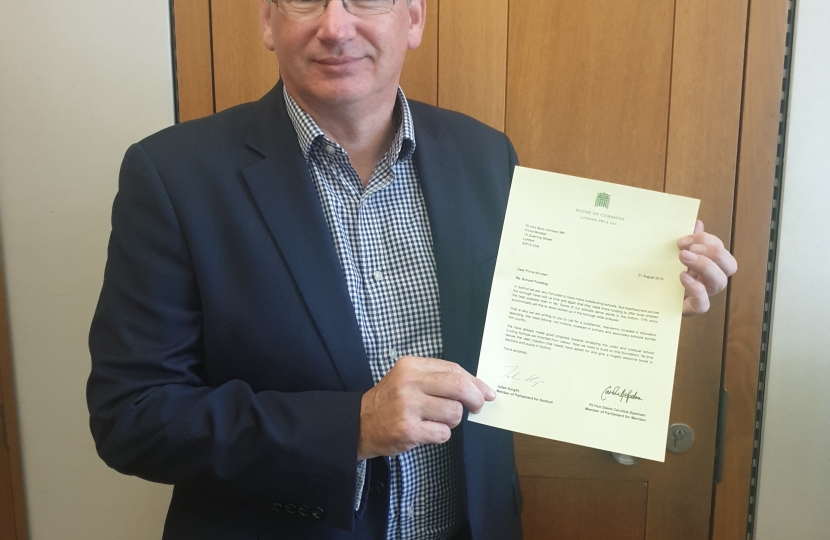 Julian Knight MP has welcomed the news that more than a score of local schools are set to receive a funding increase as part of the Government’s latest investments in education.

In a letter Gavin William, the Education Secretary, listed 15 primary and seven secondary schools which will benefit from moves to ensure that every school will receive its proper funding allocation of £3,750 and £5,000 per pupil respectively.

He was writing in response to a letter from Julian and Dame Caroline Spelman, the MP for neighbouring Meriden, demanding investment of “billions, not million” in the school system.

Ministers also intend to raise the primary school per-pupil funding base to £4,000 next year, as well as introduce a national funding formula which will help to prevent the inequalities created by Labour’s system, which saw Birmingham schools receive considerably more money than those in Solihull.

They also intend to boost the starting salary for teachers by £6,000 to attract the best and brightest graduates to the profession.

Primary schools listed as benefiting are:

Secondary schools listed as benefiting are:

Commenting on the news, Julian said:

“This is very good news for Solihull. Our teachers and pupils already do fantastic work, but have for too long struggled with the unfairness of the old funding formula. This news represents not only a cash boost for every school but also a commitment to delivering a fairer national funding plan which will ensure every school gets the money it needs.”

The Conservatives will not tolerate prejudice or discrimination

We have commissioned an independent investigation any concerns about prejudice and discrimination head-on. Because no matter your background, you should be able to feel you have a home within the Conservative Party.