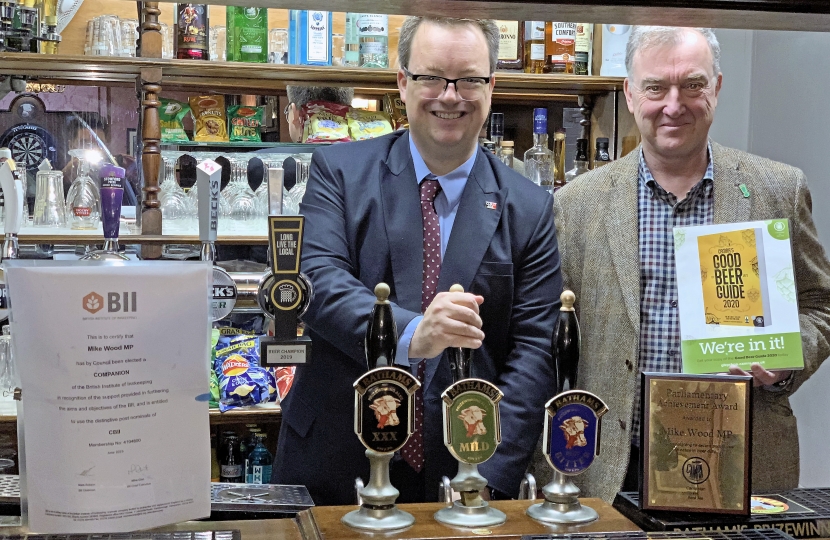 Dudley South’s MP, Mike Wood, has been honoured with a series of awards to honour his stellar work supporting the beer, brewing and pub industries across the country.

As Chairman of the All-Party Parliamentary Group (APPG) for Beer and Brewing, Mike continuously stands up for the interests of the industry and promotes the merits of cutting beer duty and business rates for pubs.

The MP has recently been awarded the Campaign for Real Ale’s (CAMRA) Parliamentary Achievement Award. This came just weeks after he was presented with a Beer Champion award by the Long Live the Local Campaign and the British Beer & Pub Association, as well as being named a Companion of the British Institute of Inkeepers.

Earlier this year, Mike secured and led a debate in the House of Commons on beer and taxation, setting out a compelling case for why the Government should recommend to the Chancellor that they should cut beer duty in future Budgets and continue to look at ways of reducing the tax burden on pubs.

Last week Mike visited The Vine Inn in Brierley Hill to mark these achievements and to congratulate the Bathams family for again being recognised in next year’s Good Pub Guide.

Speaking just after his trip to The Vine Inn (or the ‘Bull and Bladder’), Mike Wood said, “Pubs make a massive contribution to local economies, adding £34.1million to our local economy in Dudley South, as well as 1,068 jobs, but more than that, they add so much to our local identities and communities, providing a safe place for people to come together and tackle isolation.

“It is an honour to receive these special awards and I hope my work in Parliament has helped to keep the beer, brewing and pub industries prospering, which is ultimately what this is all about.

“Beer drinkers and landlords can rest assured that I will continue to do everything I can to win a fair deal for pubs.”

Production Director of Bathams Brewery, Tim Batham, said, “We are absolutely delighted to be appearing in the Good Beer Guide again next year.

“It’s always an honour when a small family brewery, like ourselves, is recognised with national awards and praise.

“Thank you to Mike for popping in to see us and for his ongoing support for the industry.”

Chairman of CAMRA, Nik Antona, said, "Mike is a champion for the beer and pub industry and has led lobbying efforts to secure beer duty freezes as well as holding debates on taxation and pubs in the House of Commons.

I was delighted to present him with CAMRA's Parliamentary Achievement Award for his work on behalf of beer drinkers both in Dudley South and across the UK.”

The independent investigation into alleged discrimination in the Party has now concluded.