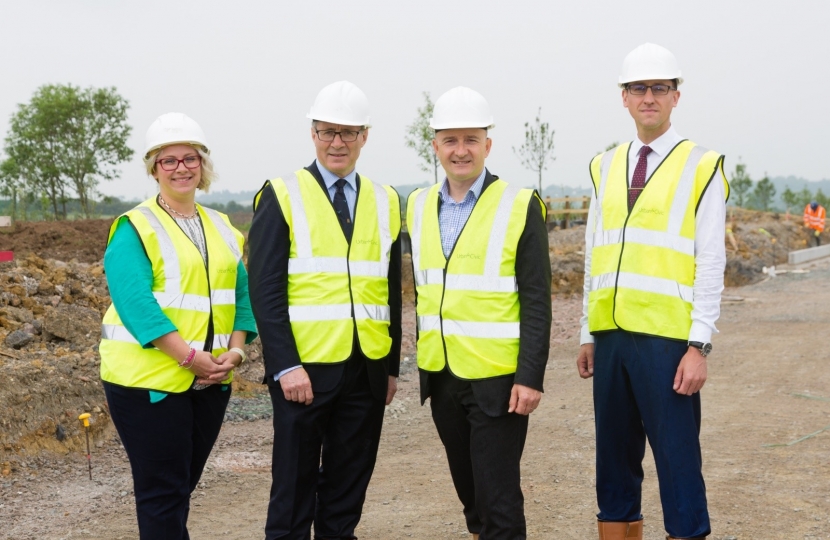 Rugby MP Mark Pawsey visited the Rugby Radio Station development outside Hillmorton, Rugby recently to see how work is progressing and have a tour of the site.

Mark was joined by Warwickshire County Councillor and Hillmorton resident Yousef Dahmash and met with Richard Coppell and Johanne Thomas from the site’s developers Urban&Civic.

It was recently announced that new development will be named ‘Houlton’ as the first ever transatlantic telephone call was sent from the Rugby Radio Station to Houlton in the USA in 1927. It is expected that the first new occupants will move onto the site in February next year.

Houlton will be developed over the next 15-20 years and will eventually comprise 6,200 new homes. The development will include extensive green spaces and amenities, three new primary schools, one secondary school and an eight GP health centre.

Following the visit Mark commented:  “I have always supported the development of the Rugby Radio Station site as it will provide a strategic solution to meet Rugby's housing needs in the years to come. The developers have worked hard to allay, and address, the concerns of local residents and ensure that the new development becomes an intrinsic part of Rugby. In turn my hope is that it will help to support our town centre and further strengthen our argument for more services at the Hospital of St Cross.

“Houlton will include all of the essential infrastructure required to ensure a sustainable and thriving development and I was very pleased that it benefited from support from the Government’s ‘Large Sites Infrastructure Fund’ which has helped to accelerate the construction of the vital link road into the town. Both myself and Cllr Dahmash, who lives in the local area, look forward to welcoming new residents when they move in next year.”

Richard Coppell, Development Director for RadioStation Rugby at Urban&Civic said: “Mark is a long-time supporter of the development and so it is always great to have him and Yousef visit the site, especially when there is so much activity to see.

“We showed Mark and Yousef around the phase one site, walked on the first roads and saw the extensive landscaping and planting underway at Dollman Common and creation of the wildlife habitats. We were able to show exactly where the first primary school will be, which will begin construction in Autumn this year as well as the progress being made on the refurbishment of Dollman Farmhouse into a community hub, Visitors Centre and café.”