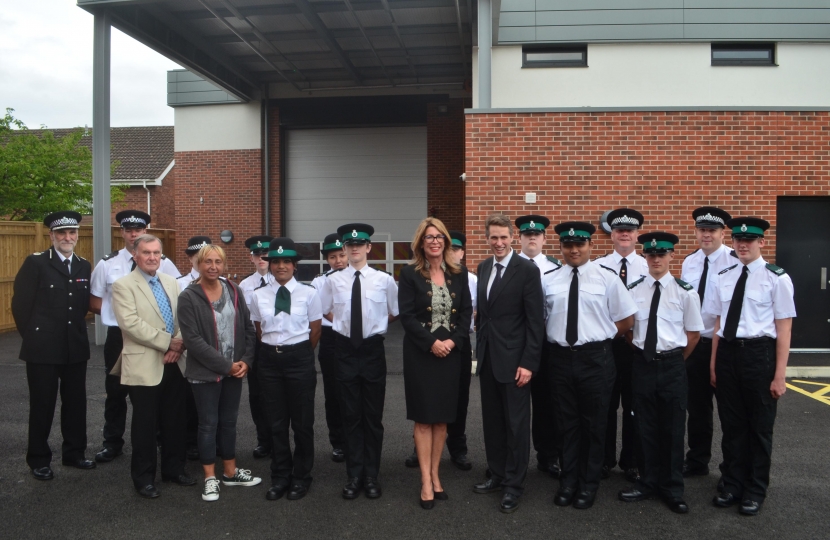 Gavin Williamson, MP for South Staffordshire, visited Codsall Police Cadets at Bilbrook and Codsall fire station to see for himself the positive impact that being a Cadet has on the lives of young people.

Gavin was introduced by the police cadets by the Deputy PCC for Staffordshire Sue Arnold and spoke with many of the young people about their experiences as part of the Cadet scheme.

During his visit Gavin also awarded a Southern Local Policing Certificate of Appreciation to Cadet Michael Drew in recognition of his assistance ensuring the safety of officers and the public during a recent traffic collision on the A34 in Great Wyrley.

The Cadet scheme was the idea of Staffordshire's Police and Crime Commissioner Matthew Ellis, created in order to strengthen links between the police and young people and to promote good citizenship.

The scheme is open to those between 14 and 17 years old, equipping young people with skills they need in the future. Cadets work towards nationally recognised qualifications in team-working, citizenship and personal skills following a detailed programme that covers every aspect of policing and how they support the police in keeping our communities safe.

As part of a uniformed and disciplined service, youngsters have become more self-confident and outgoing. Many are benefiting academically and socially as well as reconnecting with local policing teams and local communities.

Commenting on his visit Gavin said: “This is a brilliant scheme not only giving young people an opportunity to build a sense of civic duty but also equipping them with leadership skills and an understanding of what makes a good citizen.

“It is clear from listening to the Cadets talk about their experiences that the scheme has had an incredibly positive impact on their lives and I would encourage young people between the ages of 14 and 17 to take part.”