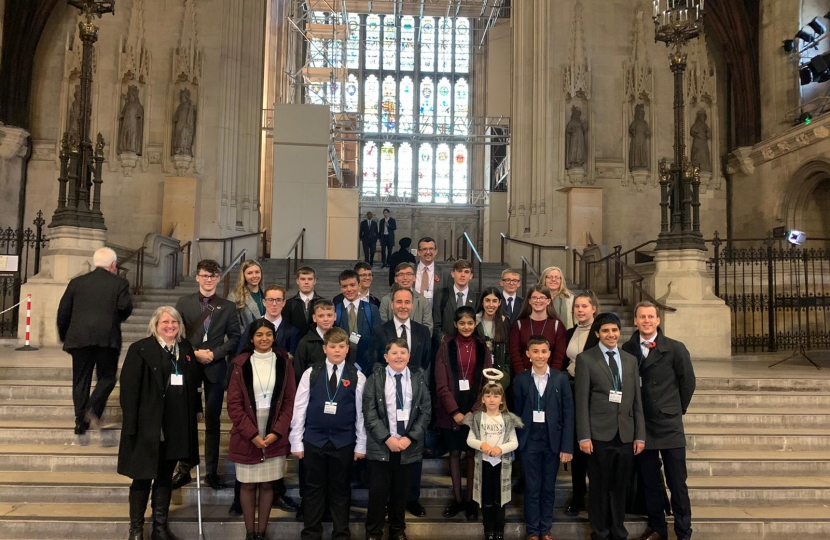 Over 20 air cadets of the 1122 Squadron, based in Tamworth, made their way down to Westminster to learn more about the war memorials within London, as well as visiting Parliament.

Their day in Parliament began with a Q&A with Colonel Bob Stewart DSO MP, a former Army Officer and the MP for Beckenham since 2010. Colonel Bob relived the stories of his time as a commanding officer in Northern Ireland, as well as the Commander of United Nations troops in Bosnia. Going on to describe his route into Parliament and the beauty of the Palace of Westminster itself was the perfect pre-amble to the tour of the buildings.

Local Tamworth MP, Christopher Pincher, then met with the air cadets and gave a little insight into the work he does everyday in representing residents both locally and nationally. The day was finished off with the opportunity to sit and listen to the debates in the House of Commons from the gallery.

“It was a pleasure to welcome the 1122 Squadron to Westminster and to show them a bit of how our Parliament works and to organise for them to speak with Colonel Bob Stewart. Cadet groups across our country are brilliant at introducing that early insight into our Armed Forces, but also, they do a lot of community action, this is widely seen in our local Tamworth branch.

“The group had some brilliant questions for me in the final Q&A for the day and I was proud to see the excellent impression the Tamworth Cadets made on my fellow MP colleagues and the House of Parliament staff.”

Speaking after the visit, the 1122 Squadron’s Commanding Officer, Flt Lft Colin Shaw said it had been a brilliant experience for the cadets and adults alike. “We would all like to say thank you to the team in the Houses of Parliament for looking after us and showing us around, thanks to go to Colonel Bob Stewart MP who gave an informative Q&A session about his time as an Army officer and his path into politics. The day however would not have been possible without the work of Christopher Pincher MP and his team, who hosted us and organised the day – we are all so grateful.”

The Four Steps of the Lockdown Roadmap Explained

The Prime Minister set out today the four-step roadmap that will guide us out of lockdown. Here’s what that roadmap means for you.