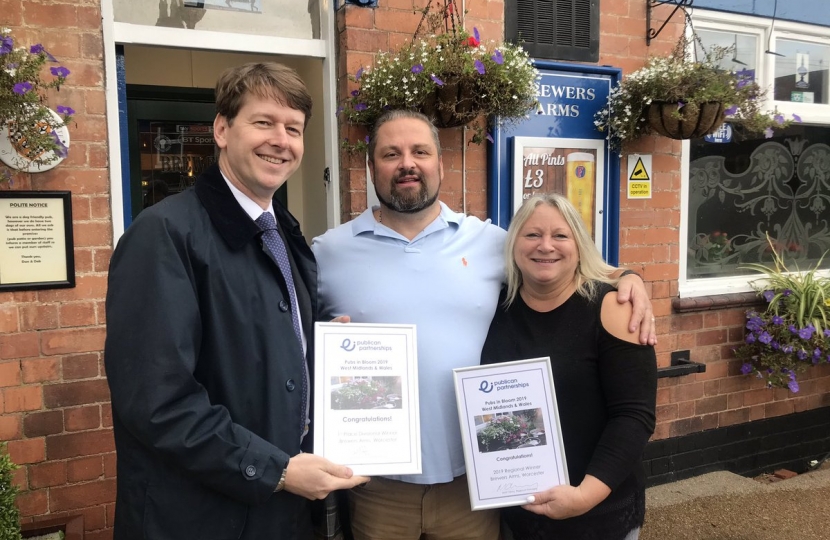 Robin Walker MP has had a busy few months showcasing Worcester’s excellent public houses as he continues to be vocal in his support for pubs and the freezing of beer duty.

City pub, The Brewers Arms, has won the Ei Publican Partnerships Wales and West Midlands Pubs in Bloom 2019. On Friday, Robin visited The Brewers Arms and had a chat with the members of staff about the successes of the pub, which is a great location to catch up with sports, and some of their concerns.

Beer and cider duty was frozen once again in the last Budget, a move massively welcomed by Robin who has campaigned for many years in support of pubs and has even been known to host his MP surgeries in pubs.

Robin was also very happy to have had the chance to visit The Alma Tavern as it is relaunched to chat with the staff about pints, polling and politics. He has long campaigned to support local pubs and to get the Alma listed as an Asset of Community Value, joining other local pubs with increased planning protection as part of Robin’s long standing “List your local” campaign.

Robin has consistently support keeping local pubs open in Worcester and was named a Parliamentary Pub Champion for 2019 by the British Beer & Pub Association and Long Live The Local.

As the Worcester News Pub of the Year awards approaches, nominations close on the 20th of December and can be submitted via slips printed in the paper, Robin is eager to highlight the fantastic pubs across the City and is urging residents to submit their nominations and votes.

Speaking about the excellent pubs in Worcester, Robin said:

“I have long championed pubs, and believe in their power to create powerful community hubs and I am committed to supporting them in every way I can. Worcester has a fantastic and broad range of historic and unique pubs; I certainly do not envy the judges of Worcester News’ Pub of the Year competition though I am looking forward to welcoming the winners to the Commons.”

“It was a real pleasure to visit The Alma Tavern a couple of weeks ago to discuss its new role in the community as a polling station, as it was visiting The Brewers Arms to congratulate them on their Pub in Bloom award.”

“I was delighted to be named a parliamentary pub champion again this year and will continue to campaign to keep locals open by getting more listed as assets of community value.”

The independent investigation into alleged discrimination in the Party has now concluded.