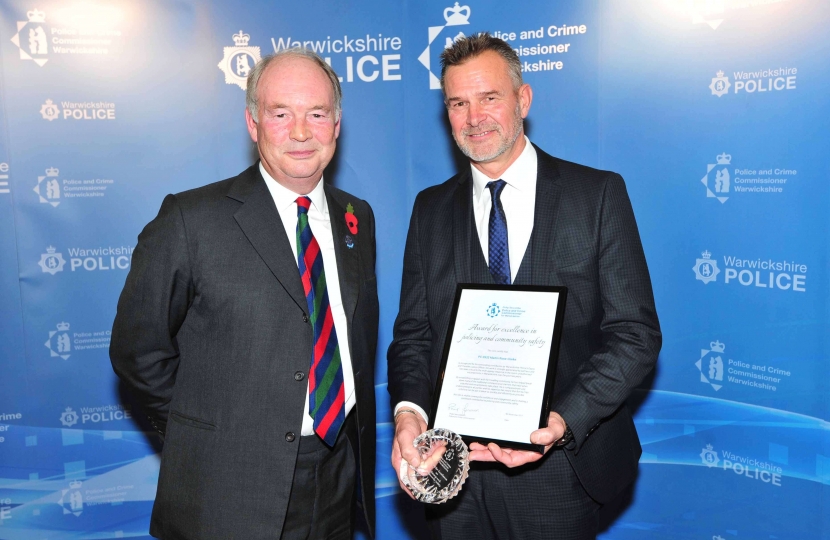 Warwickshire Police and Crime Commissioner Philip Seccombe has launched a quest to find the individual or team which has made an outstanding contribution to policing or community safety.

This will be the third year that the PCC Award for Excellence in Policing and Community Safety will be presented, following its launch during Warwickshire in 2017.

Nominations are now being sought for this year’s award, which will be presented again at the Chief Constable’s Commendations Ceremony in Leamington Spa in November.

Nominees can be either individuals or those working as part of a team within Warwickshire who have demonstrated sustained outstanding achievement over and above what is expected of them in their normal day-to-day role. Their actions must have contributed to a reduction in crime or disorder or helped bring about improvements in community safety in support of the priorities of the PCC’s Police and Crime Plan for Warwickshire, making a real difference under challenging circumstances.

Officers, police staff, volunteers, members of the Special Constabulary or people from the wider community in Warwickshire are eligible for the award. Mr Seccombe will make the final selection from those nominated.

The inaugural winner was PC Martin Rone-Clarke, Warwickshire Police's Gypsy and Traveller Liaison Officer. PC Rone-Clarke has been a key figure working with the Commissioner’s Office and key partners to help launch the PCC’s county-wide protocol, which seeks to ensure a co-ordinated response to the rise in unauthorised encampments in Warwickshire.

Last year, Robin Bunyard from Rugby was recognised for his work over more than 25 years as a vehicle-recovery contractor for Warwickshire Police, providing facilities, support and guidance in all matters vehicle-related, as well as giving disposal vehicles for free, which the force uses for officer training exercises.  He has also been an ever-present fixture at open days and other events organised by Warwickshire Police, providing vehicle recovery displays and public demonstrations simply for the enjoyment of passing on his knowledge and enthusiasm.

Commenting on the launch of the search for nominations, Mr Seccombe said: “During the course of my work I see many examples within policing, in our partner agencies, charitable organisations and among the public, of individuals and teams of people who go above and beyond what is expected of them to make a real difference to their communities.

“I am really keen that these efforts should not go unsung and the PCC Award for Excellence in Policing and Community Safety is a way of raising the profile of the most outstanding example of this each year.

“I’m keen to receive nominations from across the county, both from within policing and more widely from the public, so if you know someone who would be a worthy recipient, please do get in touch.”

The deadline for nominations is Friday 20 September.  Nomination forms can be found on the PCC website at:www.warwickshire-pcc.gov.uk or by contacting the Commissioner’s office on 01926 412322 or by email at:opcc@warwickshire.pnn.police.uk.