Andy Street is the elected Mayor of the West Midlands. He was declared winner of the historic first election on 5 May 2017.

On his election the new Mayor said: "I want to be a Mayor who works for everyone across the West Midlands and binds all of our leaders together.

“That’s because ultimately that's what this job is all about - about building a team to champion the West Midlands, building an alliance with central government, with local people, that will put the West Midlands back in its rightful place as the leading region of the UK."

A West Midlands Mayor was part of the devolution deal between the WMCA and the Government, which will see more than £1.1 billion made available for investment in the region over the next 30 years.

Andy Street will hold office for three years. The next election is in May 2020, then every four years after that.

The results in full: 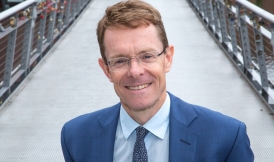