John has a broad background in the private and public sector and has a BSc (Hons) in Business Information Systems from Liverpool John Moores University and previously worked in private business as well as in the High Security Prison system as an intelligence officer.

He was elected as a Wyre Forest District Councillor in 2004, and became the authority’s youngest Leader in 2007 and led the council through difficult times, including the Icelandic banking collapse, the recession and the subsequent austerity measures. John led the process that envisaged and delivered a new cemetery and crematorium for the District and led the reinvention of the council's economic regeneration strategy in response to the recession, which has seen many millions of pounds invested and hundreds of jobs created as a result.

Whilst leader, John also led a process to reduce the number of District Councillors from 42 down to 33. He is proud that he led a council that managed to reduce its annual spend by nearly a third, whilst minimising the impact on local communities, including centralising the staff on one single site saving £750k pa. When he stepped down as Leader, John was the council's longest continuous serving leader.

John was elected as a Worcestershire County Councillor in 2005 and has held a number of roles within the council. As a Cabinet Member, he oversaw significant budget reductions within the Library Service, whilst maintaining the number of libraries and protecting the service that our communities receive. The model he championed saw the voluntary sector play a much larger role in the running of libraries. In more recent times John has been given the challenge of working with young people and their families, including tackling the ever rising number of young people in care.

John Campion was elected as Police and Crime Commissioner for the West Mercia Force area in May 2016. 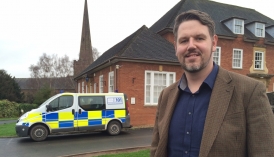