Police and Crime Comissioner for Staffordshire

Matthew started his retail business when he was 18 years old and sold it as a successful going concern eight years ago. That provided him with new opportunities and he became interested in his local community and then local politics.

He was elected to the district council at Lichfield and two years later stood for election to County Council winning the Lichfield Rural East seat and representing 13,000 people. While at County Council he took on Cabinet responsibility for the £370million social care department. Over three years the department became one of the least expensive but most effective in the UK. Matthew puts that success down to developing and motivating a group of senior professionals who became clear what was expected and where the department needed to improve the way it worked with other parts of the public sector.

He stood down from Cabinet and then County Council in 2012 having been selected to stand in the election for Staffordshire’s new Police and Crime Commissioner. He won and started work as PCC in December 2012 and was re-elected in May 2016.

Matthew’s lived in Staffordshire all his adult life and is passionate about the county and it’s potential to be one of the most successful areas to live in the UK. 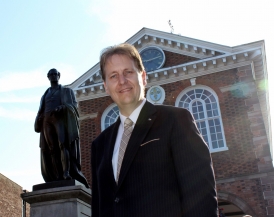